By the Fantastic Chamber TeamJanuary 7, 2021February 4th, 2021One Comment

Thanks to our Program Underwriting Sponsor!

The Leadership of Greater Nashua class of 2021 started with our opening retreat on September 24, 2020. Although we were all disappointed that the overnight retreat had to be cancelled, we all arrived with an open mind and good attitude. 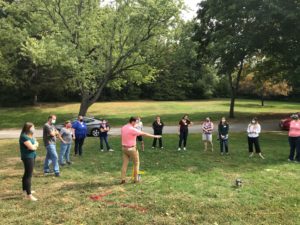 The retreat took place at Greeley Park and luckily for us it was a beautiful sunny day! After welcoming remarks from Kate Luczko we were all able to speak to the group and provide a little insight on who we are and what business we are with. After introductions we moved into some team building exercises with a name game that allowed us to learn a little more about our classmates. During this part we learned that our new friend, Patty, wasn’t the best at this version of musical chairs, as she always seemed to end up in the middle of the circle. She was a good sport about it though and it gave us a good laugh. 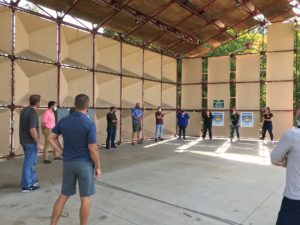 After the games we got to discuss the year’s schedule and class expectations before having a break for lunch. It was a good first half of the day for the group but I think we really hit our stride during the second half of it.

After lunch we were able to play another name game and this time we were starting to feel a bit more comfortable with another. We all brought something to the “party,” and that varied from napkins, to punch, to kittens and puppies. We were a bit confused about the “jam box” that was brought but we allowed it. 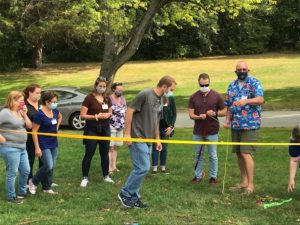 After a short break we got into some team building exercises where we got to see the dynamics of the group take shape. Although picking up a can of loose change out of a circle doesn’t seem like it could be much of a challenge, it certainly was. We learned to work together and got to see how combining everyone’s idea made us more successful. 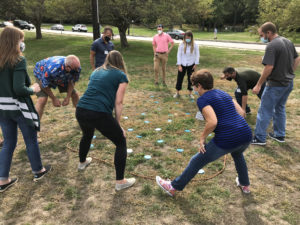 The last exercise required a bit of cardiovascular with a run up a hill and a sorting of numbers. It took us several tries but with a lot of teamwork we were able to figure out the most efficient way to do it. I think we ended up with a record time for any class however were penalized as a result of a rule violation that I am pretty confident was not stated at the beginning. I am talking to you Colin! Kidding aside, the activities Colin from the Boy Scouts put together were excellent and allowed for us to work together as a group, learn more about one another, and show us how successful we all can be as a team. 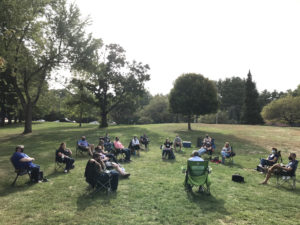 The day closed with a discussion with Paul Hebert, who was part of the LGN Inaugural Class in 1995.  I think we were all very impressed with Paul and all that he does for the community.  Paul was a good reminder as to why we were all there and it was a great way to end the day.  The class of 2021 was off to a great start and I think we were all looking forward to what was ahead.

Become a Member of the Chamber

Membership with the Greater Nashua Chamber of Commerce will grant you access to opportunities and benefits that will strengthen your connection to the community while expanding your network and brand reach.

If April showers bring May Flowers…what does Apr

We are grateful to have such amazing members. What

Happy Saturday! Have you noticed that we are start

It is #LoveYourPetDay and one thing is for sure, w

As eluded to in yesterday's post of all the 17 box

There is a special delivery headed to the 17 membe